Dr. Kobchai-Jongratnaree Jitsakula, President of the Française-Thai Chiang Rai Association and Chairman of the Board of Greenwing Co., Ltd. presented “Chiang Rai Elephants” to the Bank. Krungsri Head Office - Ploenchit Tower Ms.Pornsanong Tuchinda : Executive Director, was the recipient as of February 20, 2019. The work presented as the 31st artwork “The Precious Elephant of Chiang Rai” The idea is that the elephant is a symbol of the province, which represents its former glory as elephants were the main battle force in the war and brought victory to Chiang Rai. It was created by Phra Arjarn Phon Khuwiangwai. 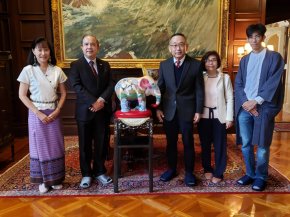 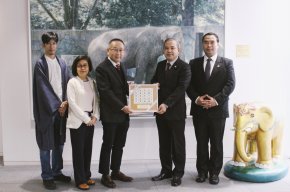